Do like Iron Man and fly over the water on a Flyboard©! 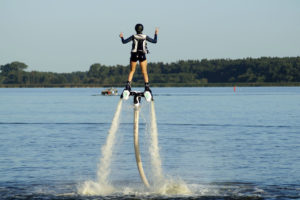 Although the flying man and his Flyboard© have attracted a lot of attention in the past few weeks, particularly during the 14th of July celebrations in Paris, their achievements go back several years already. And they didn’t even begin in the air, but on the water…

The history of the machine

Before taking to the air, the inventor of the Flyboard began by surging out of the water. Frenchman Franky Zapata made a name for himself with a water-jet propelled hydroflight board. This amazing machine, which propels its pilot out of the water thanks to two long hoses connected to the output of a Jet Ski turbine, was presented to the public for the first time in 2012. Other inventors before him, including the American Jetlev company, had also developed similar machines.

Today, Zapata Racing, the manufacturer of the Flyboard©, is the undisputed leader of the speciality. According to the figures provided by the company, over 10,000 Flyboards© have been sold around the world.

Not satisfied with this commercial success, Franky Zapata continued his research and the development of his machines. His goal: to get rid of the hoses and rise into the air with no attachments. The Flyboard Air© was finally presented in 2016. With its airborne version, the Flyboard took on a whole new dimension. Franky Zapata cut no corners for his new machine. He thus equipped it with two gas-powered micro-turbines – i.e. missile engines – of 250 horsepower each. With such power, the Flyboard Air© has no problem lifting its pilot, but as for stability… He didn’t let that stop him and in barely one month the tiny team of Zapata Racing developed the computer programs and algorithm that help stabilise the ‘flying board’ and its pilot. In May 2016, the Flyboard Air© became the first individual machine to enable powered flight.

Its creator crossed the English Channel on a Flyboard Air©

Prohibited from flying by the French Directorate General of Civil Aviation for questions of safety, Franky Zapata seriously considered leaving France. Contacts were made in the United States, notably with the US army. Was it this potential departure from France that changed things? Perhaps. In 2017, the inventor was finally granted permission to fly in France, near the airport of Avignon.

Even better: relationships began to develop between Zapata Racing and the French authorities, to the point that the French army has considered incorporating the Flyboard into its arsenal. On condition, however, that flight autonomy increased and the noise of the machine decreased. The Flyboard Air© might then allow soldiers to easily pass over obstacles, quickly climb great heights or to transfer crew from one boat to another, etc. It could even help to quickly repatriate the wounded…

As proof of the interest of the Ministry of Defence for the Flyboard Air©, it was to take part in the celebrations of the 14th of July 2019, on the Champs-Élysées, in Paris. The inventor was even granted financing of 1.3 million euros by the General Directorate of the Armed Forces. A few days later, Franky Zapata attempted to cross the English Channel ‘aboard’ his Flyboard Air. It was July 25th, i.e. 110 years to the day after the first crossing by plane by Louis Bleriot, in 1909. Unfortunately, it was a failure. He made a new attempt on August 4th: the flying man left Sangatte, in France, to reach St Margaret’s Bay, England, in 21 minutes. Blériot’s adventure had taken 37 minutes.

Where can you try out a Flyboard© and how much does it cost?

However, this feat and the huge media coverage given to Franky Zapata and his invention have not democratised the activity. The cost, the exorbitant fuel consumption, the noise and the difficulty of mastering ‘the board’ make it an extreme machine.

Today, it’s not possible for mere mortals, wealthy though they may be, to play at being superheroes. Thrill seekers may nevertheless enjoy the pleasure of the aquatic Flyboard©. This extreme sport is indeed accessible from the pontoon of a water sports centre, notably on the French Riviera, with no need for a licence or a permit of any kind.

Here is a good address to try out a Flyboard in Nice: www.nikaiaglisse.com/en. You can contact them via their website. However, it is not enough to let yourself be guided by your sensations to leap, spin and almost fly above the waves. It is in fact necessary to learn how to ‘pilot’ a Flyboard©.

But after all, the same applies to many other sports, like sailing, almost all board sports and skydiving. Introductory lessons, which may last from 20 to 30 minutes, are thus given, during which a specially trained instructor teaches the basics of the Flyboard©. As for the prices, they depend on the water sports centre and the duration of the lessons, generally costing around one hundred euros. The price to pay for thrills and adventure.